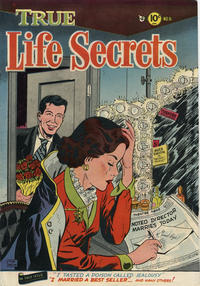 I Tasted A Poison Called Jealousy (Table of Contents: 3)

Genre
romance
Characters
June Wadleigh Peters; Burt Peters; Helen Sanderson; Frances Delany; Mr. Constance; Lillie; Doctor
Synopsis
June marries fashion designer Burt and they honeymoon in Florida, but she is upset by the countless women who flirt with him. When Burt meets buyer Frances, June bursts in and jealously accuses him of being unfaithful to her, only to learn that Frances is married and it was a business meeting. June later thinks he's seeing a young woman but it's only a little girl for whom he's designing a birthday dress. Burt and June argue and he's nearly badly injured in a fall, which makes June realize her jealousy is irrational.

The Deadliest Poison In the World (Table of Contents: 4)

I Married a Best Seller (Table of Contents: 5)

Genre
romance
Characters
Frances Hunington Baker; Jack Baker; Harold Phillips; John Waterson; Lilly Martin; Alice Longwood
Synopsis
Frances helps penniless author Jack get a job at the gas station/hot dog stand where she works. They fall in love and she buys him a typewriter so he can submit his novel to publishers. Jack and Frances get married and he sells his novel. The book is a hit and they move to the city. Frances catches Jack kissing two secretaries hired to assist him on his second book. She shows the women that Jack has "tropical fever" attacks and has spent all of his royalty money, so they drop him. Jack promises to change his ways and Frances sticks with him.

On page 7, Lilly says she was sent to show Jack "around the town to meet publicity contacts!" However, on page 8 she has become Jack's secretary and her name is now spelled "Lily."

Sworn to by Burton N. Levey, Editor on September 19, 1951. No circulation data. Appears on inside back cover.