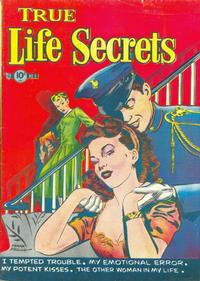 My Emotional Error! (Table of Contents: 2)

Genre
romance
Characters
Amy Mead; Frances; Jim; Howard Chittenden; Detective Barker; Detective Leslie
Synopsis
Amy fears she’ll be an “old maid,” so she dates Howard, a client of the brokerage firm where she works. They fall in love and become engaged. Howard claims his mother needs an operation and convinces Amy to credit $5,000 to his account, promising to replace it promptly. He later asks Amy for an additional $15,000. Amy learns she’s pregnant. The police tell Amy that Howard has been pulling this scam on women in various cities, but resisted arrest and was mortally wounded. Before he dies, Howard apologizes. Amy is sentenced to three years’ probation for her crime.
Reprints
Keywords
unwed mother

Who Was the Other Woman? (Table of Contents: 3)

Genre
romance
Characters
Rose Eltens; Herbert Bosphor; John Dalton; Wilton Macaby; Eve Dashway
Synopsis
Rose works for Broadway producer John as a script reader. She recommends a play by Herbert and he is attracted to her personally, but Rose loves John and he loves her. Herbert says John is a womanizer and having an affair with actress Eve. Rose is relieved to learn Eve is actually John’s mother.

The table of contents lists this story as "The Other Woman in My Life."

My Potent Kisses (Table of Contents: 5)

Genre
romance
Characters
Pearl Martins; Frank Hartly; Sam; Robert Benson; Dr. Willoughby
Synopsis
Pearl dates fellow workers Frank and Sam, but gets a reputation as a “hot dish” because she lets them kiss her. When she overhears Frank, Sam and Robert discussing her, she becomes upset and distracted, and is hit by a car. Bob donates blood to save her life and apologizes for his thoughtless remarks. Pearl and Bob fall in love and marry.
Reprints

I Tempted Trouble! (Table of Contents: 6)

Genre
romance
Characters
Loretta Dorsett; Bill Dorsett; Pete Byrne; Mr. Winster
Synopsis
Loretta and Bill get married. He gets a promotion that means he has to travel, leaving Loretta alone in their new home. When Bill is called away to work, Loretta sees a play with Bill’s friend Pete, who kisses her afterward. Loretta doesn’t tell Bill, but when her husband goes on another trip, Pete convinces her to go out with him again. When they return to her house, Pete tries to force himself on Loretta, but Bill has come home early and punches his faithless friend. Loretta says “there can never be any other man for a married woman except her husband!”
Reprints

Love in the Old Days (Table of Contents: 7)