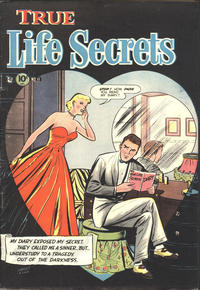 Contents page. Inside front cover. Black-and-white. Two of the four story titles are incorrect (the story titles on the cover do match the actual stories).

Understudy to a Tragedy (Table of Contents: 2)

Genre
romance
Characters
Gail Sawyer; Wendy Sawyer; Scott; Scott's wife; fisherman; Wendy's husband
Synopsis
Gail, having spent her inheritance, visits her wealthy twin sister Wendy. When Wendy is killed in a private plane crash that Gail survives, Gail decides to assume her identity. She agrees to marry Wendy's rich boyfriend Scott. However, the fisherman who rescued Gail blackmails her and she decides to murder him. She's interrupted by Scott, who is then exposed as a married fortune-hunter. Wendy returns, having also been picked up at sea. She orders Gail to leave forever.

Genre
romance
Characters
Luana's sister; Charlie; Luana; Huey; Doctor; Joe
Synopsis
A woman ducks into Charlie's bar to get out of the rain. He allows her to dry her clothes in the backroom, and she tells her story. To save her younger sister Luana from marrying Huey, she marries him herself. The woman divorces Huey and lives a shady life and loses touch with Luana. The woman, hospitalized after an accident, seduces her doctor: he steals a diamond and hides it in her bandage. She tells him to get a divorce then discovers he's married to Luana, who doesn't recognize her sister. The woman leaves for Luana's sake. Her story told, she departs from the bar.

The protagonist has no given name.

Inside front cover lists title as "I'm No Sinner."

On page 3, one of the envelopes is marked "Adress Unknown."

My Diary Exposed My Secret (Table of Contents: 5)

Genre
romance
Characters
Ruth Larson; Lee; Chris; Diana Pearce; Fred Pearce
Synopsis
Ruth goes with her friend Lee to a weekend party. She and fellow guest Chris are attracted to each other. Diana, another guest, steals Ruth's diary, which contains details of Ruth's conviction for robbery. Chris finds the diary and Ruth thinks he is the one who took it. She then learns the truth, and also discovers Diana wants to wed the wealthy Chris to solve her father's financial woes. Chris intervenes: he loves Ruth and doesn't care about her past.

Inside front cover lists story title as "Tears From My Diary."

Out of the Darkness (Table of Contents: 6)

Genre
romance
Characters
Ellen; Jack; Dave Dawson; Ellen's mother; Doris
Synopsis
Ellen has a secret in her past: her father was insane, and her mother killed him in self-defense. Ellen falls in love with Dave, but is afraid to tell him about this. She agrees to elope with him. Dave shows up early and is shot to death by Ellen's mother: he was really a burglar who romanced women to get information on them. Ellen and Jack then fall in love, but she fears revealing her secret. Ellen's mother says she was adopted. Ellen can now marry Jack with a clean conscience.

First Line of Dialogue or Text
On with the dance!
Genre
romance

Inside back cover. Black-and-white. Bottom half of page is an advertisement.