Cover is rendered in wash-tone. 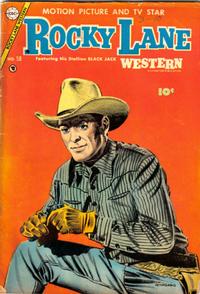 A letter from Rocky talking about busting broncs at the T-Bar-T ranch.

There is no known story that this is reprinted from in the Fawcett line of titles. Colonel Corn and Korny Kobb was reworked as this western themed humor strip in one appearance Monte Hale Western (Fawcett, 1948 series) #81 (August 1953) and this is probably inventory left-over from when Charlton purchased Fawcett's titles after they closed their comic book line. No further appearances of this feature known.

Not identified as a published Fawcett story; likely inventory.