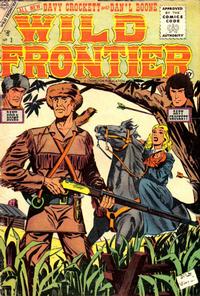 The Double-Drenching (Table of Contents: 2)

Genre
western-frontier
Characters
Daniel Boone
Synopsis
Daniel sets out after a rogue bear that has killed cattle and terrified people.

Artwork is similar to the story in Toby's Tales of Horror (Toby, 1952 series) #1, "The Ugliest Man in the World," that is credited on both pencils and inks to Molno at Lewis Wayne Gallery of Original Comic Art. Nick Caputo is uncertain of the Molno inking identification.

An Amphibious Critter (Table of Contents: 7)

The art is very similar to the Nicholas/Trapani signed story in Cowboy Western (Charlton, 1954 series) #67. The inking is a little uncertain, as Trapani has more zig-zag eyebrows. Nick Caputo is uncertain of the Nicholas pencils and questions the Trapani inking credit.

The Peddler (Table of Contents: 11)

Job Number
S515
Genre
western-frontier
Characters
Peddler
Synopsis
A peddler has rifles for the fort hidden under his load of calico.

The close up faces resembles Molno's faces in the Daniel Boone story, and the inking looks like Alascia's work.