Distributed to newstands in August 1962. This issue includes 10 pages of paid advertisements.

Loki, the God of Mischief!! (Table of Contents)

First Line of Dialogue or Text
I challenge you to match your powers against mine, Thor!
Genre
superhero
Characters
Thor [Doctor Donald Blake]; Loki
Reprints 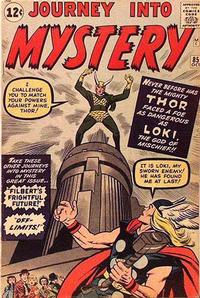 First Line of Dialogue or Text
At last you've met your match, Thor!
Genre
superhero
Characters
Thor [Donald Blake]; Loki (introduction); Heimdall (introduction, cameo); Odin (introduction); Jane Foster; Balder (introduction); Tyr (introduction)
Synopsis
Loki escapes from his prison in Asgard and comes to Earth to get revenge on Thor. The trickster hypnotizes him to help make mischief, but Thor’s transformation into Donald Blake frees him from hypnosis, allowing him to defeat Loki and return him to Asgard.
Reprints

This story is divided into two parts: an unmarked first part (5 pp) and part two—"The Vengeance of Loki!" (8 pp). This is the first appearance of Asgard. Heimdall looks nothing like his later appearances. Odin's name is mentioned for the first time.

The first part is expanded and retold in Thor: First Thunder (Marvel, 2010 series) #2.

The Clock (Table of Contents: 2)

Job Number
[K-9]
First Line of Dialogue or Text
The snow fell quietly in the little Alpine village, and Franz Ammergau sat at his candlelit workbench and worked far into the night.
Genre
fantasy-supernatural
Characters
Franz Ammergau; Gerda; Dr. Schmitt
Synopsis
An old clockmaker nearly dies from the cold, but is saved by the wooden figures adorning his clocks, which he has given parts of his own soul.
Reprints

First Line of Dialogue or Text
This is Filbert Phelps!
Genre
science fiction
Characters
Filbert Phelps
Synopsis
A greedy scientist builds a time machine to visit the future and make money, but he finds himself stranded in a void, since the future does not yet exist.
Reprints
Keywords
time travel

Job Number
V-867
First Line of Dialogue or Text
Of all the planets in the known galaxy, this particular one was off-limits!
Genre
science fiction
Characters
Rip van Winkle
Synopsis
This story casts the character of Rip Van Winkle as a humanoid alien who visits planet Earth in violation of galactic travel guidelines which have declared the planet off limits due to its dormitive effect.
Reprints

Job number from Tom Lammers and Ger Apeldoorn via the Atlas/Timely discussion group. Letters credit is from The Mighty Thor Comics Index #5 by George Olshevsky.