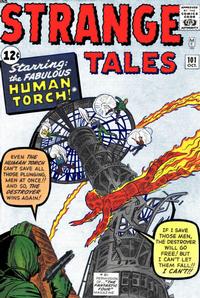 The Human Torch (Table of Contents: 1)

This spin-off series no doubt the result of publisher Martin Goodman feeling that "The Human Torch" has been good luck for him, dating all the way back to Marvel Comics #1 (October 1939). The plot about spies trying to scare townsfolk away from where a submarine is docking may have served as the inspiration for the 1967 Spider-Man cartoon, "Return Of The Flying Dutchman".

The Impossible Spaceship! (Table of Contents: 3)

Genre
science fiction
Synopsis
An empty spaceship arrives on Earth, confusing everyone. The ship lands and stays for a time before leaving, disappointed that the humans couldn’t realize that the ship itself was alive.
Reprints

Genre
horror-suspense
Characters
Archie Craig
Synopsis
A criminal trying to escape is repeatedly confronted with the number X-35. He is run over and killed by a car bearing the license plate number X-35.
Reprints