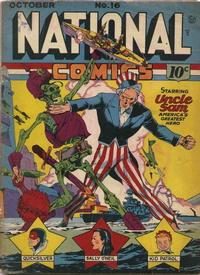 Genre
superhero
Characters
Uncle Sam; Buddy Smith; George Washington (as a ghost); Emil von Blon (Warren Brothers movie director); fifth columnists (villains)
Synopsis
Spies discover fertile ground for an attack on a movie set. The director is so successful and powerful that he was able to procure the use of U.S. Navy ships. The movie is meant to stir American patriotism, but the set is infiltrated by fifth columnists. Buddy, on board one of the submarines, discovers this and turns the tables on the saboteurs, while the ghost of George Washington appears to Uncle Sam to alert him of the danger. Together, Sam and Buddy defeat the spies but only after several ships have been destroyed.
Reprints

[The Amateur Hour] (Table of Contents: 3)

Script credit suggeted by Jerry Bails' Who's Who.

The art match the Nicholas sample at Who's Who.

The artwork matches some Leav-credited stories in Jumbo Comics #28-29.

The art is similar to the Nordling sample on Who's Who.

[Pagi's Return to the Islands] (Table of Contents: 6)

Genre
superhero
Characters
Quicksilver [Max]; McGinty (villain, radical speaker); C.J. Merton (villain, political boss)
Synopsis
A political boss is paying crooks across America to make speeches and to stir up dissent in a scheme to become president under a new party banner and to rule as a dictator.

Several Quicksilver stories are bylined Nick Cardy, but the art is not in any way similar to his Senorita Rio stories in Fight Comics #19 and 21. They are signed N. Viscardi, his real name. Also Nick Viscardi's first Lady Luck story in the Sunday Spirit section for May 18, 1941 has a very different style from this one. It is identical to the unmistakeable art of Paul Gustavson. Either is Nick Cardy the writer, or just a byline name like most of the other byline names with no connection to any real artist used in Quality comics. A little mystery. Originally credited "Nick Cardy (signed)".

[The Counterfeiter's Cannon] (Table of Contents: 8)

The artwork match the Witmer sample at Who's Who.

Flames of Freedom (Table of Contents: 11)

The art is very similar to CRandall's signed story in Police Comics #1, but the inking is a little different.

First Line of Dialogue or Text
What's This? Somebody shipping a dog to me?
Genre
humor
Characters
Miss Winky

[Incident in Greenland] (Table of Contents: 15)

Lance Blackwood, according to the Who's Who, is a by-line on this strip.

Credits from the Quality Companion (TwoMorrows, 2012).