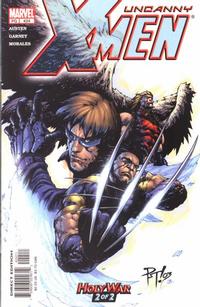 Each inker was credited with only a single name in this issue, so the identity of “Green” is uncertain; Dan Green and Randy Green have been suggested. Weight of evidence favors Dan Green. Official Index to the Marvel Universe (Vandal et al. 2009) credits Dan Green, and Dan Green’s Wikipedia page lists this issue. Dan Green is a known associate of Mark Morales, as they were jointly credited (“Mark Morales w/ Dan Green”) in Uncanny X-Men #436 (February 2004).