Origin at the West Point of Space! (Table of Contents) 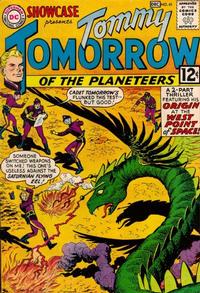 First Line of Dialogue or Text
Planeteers!... The heart of every youth in the solar system soars at...
Genre
science fiction
Characters
Planeteers; Cadet Tommy Tomorrow; unnamed Unit Sergeant (intro); Cadet Lon Vurian of Venus (intro); Cadet Hughes; Cadet Ku-Rami; Cadet Hjaro; Cadet Morgan; unnamed Academy Commandant; General Vurian of Venus (mentioned); Captain Lenk (mentioned); Cadet Lo-Duey of Mars (mentioned); Chardu of Mercury (villain, posing as Cadet Lo-Duey of Mars)
Synopsis
Tommy Tomorrow arrives with other rookies at the Planeteer Academy, known as the "West Point of the Solar System". He meets other cadets, such as Lon Vurian of Venus and Lo-Duey of Mars. Someone repeatedly sabotages Tommy, until none of the other cadets trust him. At the end of their training, Tommy Tomorrow and Lon Vurian, the top two students, are chosen to lead two teams in competition to locate the Stone of Gazda which has been hidden on a distant asteroid. The cadets learn too late that Lo-Duey was actually Chardu of Mercury, who has stolen and escaped with the all-powerful Stone.
Keywords
Asteroid 9-Z; Gazda; Lenk Memorial Auditorium; Martian; Mercurian; Planeteer Academy a.k.a. "The West Point of the Solar System" a.k.a. "The West Point of Space"; Saturnian; Stone of Gazda; Venusian; zolonite

This story takes place in the 21st century. The stories in Showcase are prequels to the Tommy Tomorrow tales told in Real Fact Comics, Action Comics, and World's Finest Comics. Chronologically, this story follows the flashback tale in Action Comics #224.

Job Number
#529
First Line of Dialogue or Text
The Earth's atmosphere is so immense that there is approximately two million tons of air for every human being on Earth!
Genre
non-fiction; math & science

Man Tries for the Moon -- Yesterday and Today (Table of Contents: 8)

First Line of Dialogue or Text
Travel to the moon was contemplated in Babylonia, about...
Genre
non-fiction; math & science

Pioneers of the Sky (Table of Contents: 9)

Chapter 2: The Criminal Who Couldn't Die (Table of Contents: 10)

First Line of Dialogue or Text
Tricked into a personal feud that permitted the criminal Chardu to steal the...
Genre
science fiction
Characters
Planeteers; Cadet/Lt. Tommy Tomorrow; unnamed Unit Sergeant (next in #46); Cadet/Lt. Lon Vurian of Venus; Cadet Hughes; Cadet Ku-Rami; Cadet Hjaro; Cadet Morgan; General Vurian of Venus (intro); unnamed Academy Commandant; Professor Trikon of Venus University (mentioned); Chardu of Mercury (villain); Kyl-Roj of Mercury (villain); unnamed second Mercurian henchman (villain)
Synopsis
Tommy Tomorrow and Lon Vurian join together and follow after Chardu. Tommy explains to Lon that when solar rays pass through the Stone of Gazda, they form a wall of energy that can't be penetrated by any weapon. The two cadets succeed in stopping Chardu and regaining possession of the Stone. They are both awarded the Academy Medal of Valor, and graduate with the rank of Lieutenant.
Keywords
Academy Medal of Valor; Mercurian; Stone of Gazda; Venus; Venusian