The Super-Revenge of the Phantom Zone Prisoner! (Table of Contents) 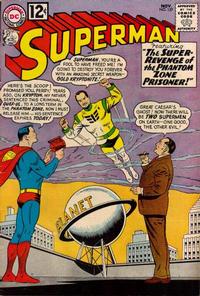 The Super-Revenge of the Phantom Zone Prisoner! (Table of Contents: 2)

Genre
superhero
Characters
Superman; Supergirl (guest star); Rog-Ar (intro, villain, flashback); Jor-El (flashback); Perry White; Phantom Zone inhabitants [Quex-Ul (intro); Jax-Ur; Professor Vakox; Dr. Xadu; Mon-El]
Synopsis
Superman releases Quex-Ul from the Phantom Zone since he has served his sentence, but Quex-Ul vows revenge on the son of the man who pronounced him guilty. However, when Quex-Ul displays heroic behavior, Superman wonders if he was truly guilty and travels back in time to Krypton to witness Quex-Ul being hypnotized into believing himself guilty. When Supergirl tells Quex-Ul he is innocent, he sacrifices himself to keep Superman from being exposed to a Gold Kryptonite trap he has set for him. In doing so, Quex-Ul loses his powers and memory, so Superman sets him up in a new life in Metropolis.
Reprints
Keywords
Fortress of Solitude; gold kryptonite (intro in non-imaginary story); Krypton (flashback); Phantom Zone

Quex-Ul's next appearance is in The Phantom Zone #1.
Gold Kryptonite's first appearance, in an imaginary story, was in Adventure Comics #299.
This story establishes that 18 Kryptonian sun-cycles is about 25 Earth years.

The Super-Genie of Metropolis! (Table of Contents: 6)

First Line of Dialogue or Text
When you finish work, come over to my place, Ollie.
Genre
humor
Reprints