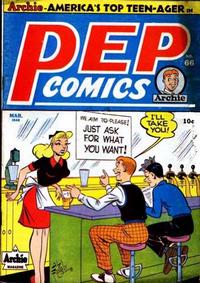 Genre
humor; teen
Characters
The Shield [Joe Higgins]; Archie Andrews
Synopsis
Due to a new, heavy schedule from the FBI, The Shield bids farewell to readers and turns his club over to Archie Andrews.
Reprints

Genre
teen
Characters
Archie Andrews; Fred Andrews; Mrs. Andrews
Synopsis
Archie's pop wants to have the house remodeled while Mrs. Andrews is away. After he gets an estimate he can't afford, he enlists Archie's help to try and make the changes themselves. There are some accidents and the house gets sold and later condemned. They end up sleeping in a tent on their front lawn.
Reprints
Keywords
redecorating; vacation

First Line of Dialogue or Text
H-Hello, Sis!
Genre
teen; fashion
Characters
Katy Keene; Sis; Eddie; K.O Kelly
Synopsis
After taking Sis's advice Eddie starts to work out, so he can compete with K.O. After he gets injured, Katy nurses his wounds.

First Line of Dialogue or Text
There's one thing I'm gonna do for a while!
Genre
humor; teen
Characters
Jughead Jones; Archie Andrews; Mrs. Jones
Synopsis
Wanting to avoid trouble, Jughead decides to avoid Archie. In doing so, he ends up going through a garbage truck and getting shot in the butt by a shotgun wielding Archie, sending him for a one story fall.
Reprints
Keywords
burglary; garbage; hiding; ladder; shotgun; trash can

First Jughead solo story, though Jughead had previously been credited as a featured character in Archie stories and had shared stories with his cousin, Souphead.

First Line of Dialogue or Text
R.I.P.
Genre
humor; fantasy-supernatural
Characters
Gloomy Gus; Gabby; St. Pete
Synopsis
Gus enters and takes over the body of a man in hospital. He thinks it's great until he reads a newspaper and realizes the person is actually a criminal who can now be electrocuted since Gus has reanimated him.