First Line of Dialogue or Text
Archie! Which of the flowers in my garden do you like the best? The roses or the tulips?
Genre
humor; teen
Characters
Veronica Lodge; Archie Andrews
Reprints
Keywords
flowers; gardening; roses; tulips

Later redrawn for the cover of Pep #146 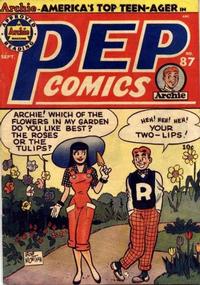 Base Brawl (Table of Contents: 1)

Puzzle page with a Word Ladder and a maze.

A Retiring Fellow (Table of Contents: 6)

Genre
humor; teen
Characters
Jughead Jones; Archie Andrews; Veronica Lodge (cameo); Mildred; Moose Mason
Synopsis
A pretty girl asks Jughead to change a flat tire on her car. Jughead inadvertently fixes an old man's flat tire first, then fixes the girl's. About that time her husky boyfriend shows up. Frustrated, Jughead kicks the tire on the nearest car, which happens to be Moose's and gives him yet another tire to change.
Keywords
flat tires

Genre
humor; teen
Characters
Wilbur; Red; Laurie; Linda; Wilbur's mother; Wilbur's father
Synopsis
Wilbur buys a box of candy and Linda and Laurie each think he's buying it for the other. In reality he's buying it for his mother's birthday. The gang takes his mother to the carnival, but she finds it more peaceful back home by herself.
Keywords
birthday; candy; carnival; roller coaster

"Eduardos" is the name on the gift-wrapped box in splash panel. The initials "JE" are in panel three of page five.

First Line of Dialogue or Text
Can you find your way through the maze below...

Rebus puzzle with answer of Hum and a maze.

First Line of Dialogue or Text
The Pirate Was a Lady
Genre
humor; fashion
Characters
Katy Keene; Sis; Skipper Mason
Synopsis
Skipper Mason tells Katy and Sis he can get them roles in a pirate movie production, but it turns out to just be parts on a float in a parade advertising a movie.
Keywords
candy; dream; float; horoscope; parade; parrot; pirates; taffy; treasure

Time Marches On! (Table of Contents: 15)

List of 44 persons (ages 8 to 15) desiring pen pals. In addition to the United States, England and Trinidad are represented.

Part of a series.