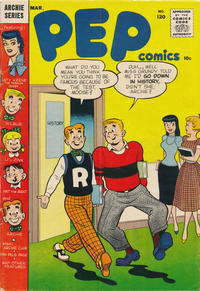 Shoes Your Weapons! (Table of Contents: 3)

Genre
humor; teen
Characters
Moose Mason; Midge Klump
Synopsis
While bowling, all Midge can throw is gutter balls. But she won't quit because her feet hurt and her bowling shoes are the only comfortable shoes she owns.
Keywords
bowling; gutter balls; shoes

Genre
humor; teen
Characters
Jughead Jones; Betty Cooper
Synopsis
Jughead tells Betty that women are like elephants. Nice to look at but who wants to own one.
Keywords
marriage

Weed It and Reap (Table of Contents: 5)

Genre
humor; teen
Characters
Jughead Jones; Archie Andrews
Synopsis
Archie can't tell the difference between a garden plant and a weed. Jughead suggests digging everything up. Whatever grows back will be a weed.
Keywords
gardening; weeds

Genre
humor; teen
Characters
Betty Cooper; Veronica Lodge; Jughead Jones; Mr. Weatherbee; Miss Grundy
Synopsis
Mr. Weatherbee gives Veronica a filing job. She then passes it off on to Betty, so it will keep Betty away from Archie. When Betty asks for Archie's help with the job, and gets it, it drives Veronica crazy knowing the two of them will be spending time together, alone. Veronica talks Mr. Weatherbee into giving her the filing job back, but Betty still has Archie because now Veronica has to do the filing by herself. Frustrated, Veronica ends up sitting on the floor shredding files with her teeth and hands.
Reprints
Keywords
file cabinets; filing

Statement of Ownership for October 1, 1956. No circulation figures given.

First Line of Dialogue or Text
Danny calls to Katy
Genre
humor
Characters
Katy Keene; Gloria Grandbilt; Danny; Errol Swoon
Synopsis
Katy gets the part in a movie, but Gloria badgers Danny until he gives the part to her instead. After finding she has to wear a clown suit, Gloria quits and Katy gets the part again.
Keywords
clown; costume party; movie; poem