On-sale date from 1962 Periodicals, Copyright Office, Library of Congress.
This issue has variants: 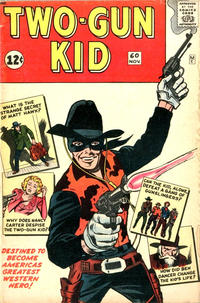 The Beginning of the Two-Gun Kid (Table of Contents: 1)

No Guns in Town (Table of Contents: 2)

The Outcast (Table of Contents: 3)

I Hate the Two-Gun Kid (Table of Contents: 4)