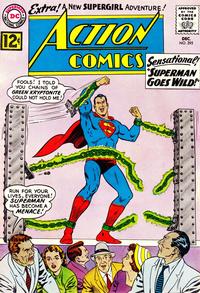 This story includes "Plan P" which was to be implemented by Perry White. Story refers to Lois Lane's "Plan L" previously seen in Superman's Girl Friend #29.

First Line of Dialogue or Text
You can have this one real cheap.
Genre
teen
Characters
Alan; Vic
Synopsis
Vic buys a car with no brakes, but finds a unique way to stop it.

Genre
superhero
Characters
Supergirl [Linda Danvers]; Lena Thorul (Luthor's sister); Fred Danvers; Edna Danvers; Dr. Anton; Lex Luthor; Lex Luthor's parents (flashback)
Synopsis
Lena demonstrates E.S.P. talents but is denied a job with the FBI, so Supergirl goes into the past to find more information on her to help her get the job. She finds Lena is really Lex Luthor's little sister and one of his experiments accidentally gave her telepathic powers, which she uses in a plan to capture some crooks and prove she is worthy of an FBI position.
Reprints

Includes a flashback of Lex Luthor's origin as a criminal.

Superman Talks About... "Pennies for UNICEF!" (Table of Contents: 14)

Genre
advocacy; superhero
Characters
Superman
Synopsis
Joe doesn't see the purpose of collecting money for UNICEF while trick-or-treating until Superman takes him and his friend Tom on a trip around the world to see what UNICEF does for children in other lands.

Inside back cover; published in cooperation with the National Social Welfare Assembly.
Later published in DC comics cover-dated December 1966.