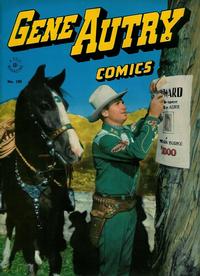 Gene Autry and the Battle of the Running-W (Table of Contents: 1)

Story begins on inside front cover. Inside front cover is in black, white and red. Jesse Marsh is credited to the early Gene Autry stories by Jerry Bails' Who's Who, and the faces on page two, with protruding lower face are by Marsh. Also the lack of movement in action scenes. Art ID by Steinar Ådland December 2010

Gene Autry and the Key (Table of Contents: 2)