Pencil and ink credits for this sequence from Alberto Becattini (May 14, 2007). 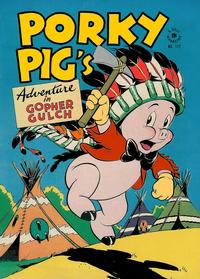 Genre
anthropomorphic-funny animals; western-frontier; humor
Characters
Porky Pig; Petunia Pig; Bugs Bunny; Elmer Fudd (cameo); Sniffles (cameo)
Synopsis
Porky finds a lost toupee that belongs to movie star Eric Jones. As a reward (and to keep them from exposing his secret) he sends Porky and Bugs on a trip to Gopher Gulch. Porky has found that he is a distant relative of Chief Pigronimo and wants to visit the nearby Black Paw Indian Reservation. They get mixed up in a plot to cheat the Indians off their land.

Story starts on the inside front cover in black, red, and white. Pencils, inks, and lettering credits for this sequence from Alberto Becattini (May 14, 2007).

Porky Pig and the Million Dollar Mix-Up (Table of Contents: 2)

Genre
adventure; anthropomorphic-funny animals; humor
Characters
Porky Pig; Petunia Pig; Bugs Bunny
Synopsis
Porky is to inherit one million dollars from the estate of his uncle Hog Brissels. The King of the bankrupt kingdom of Pigvania comes up with a scheme where he claims that Porky is his son, who was switched with another baby on the King's trip to America years ago. That makes the Crown Prince the rightful recipient of the money. The story goes over and the Prince is given the money. The King takes Porky and Bugs back to Pigvania, where he plans to "eliminate them."

Statue of Liberty is featured in final panel. Pencils, inks, and lettering credits for this sequence from Alberto Becattini (May 14, 2007).

Genre
anthropomorphic-funny animals; humor
Characters
Porky Pig; Bugs Bunny; Petunia Pig
Synopsis
Petunia is to start work at a new job, but was already scheduled to work a charity bazaar and deliver a cake to Silas Pinchpenny. She convinces Porky to disguise himself as her so she can be in two places at the same time. The masquerade works until Pinchpenny wants Petunia (Porky) to come to his house immediately to bake him a cake.

Story continues on inside back cover in black, red, and white and concludes on the back cover in color. Pencils, inks, and lettering credits for this sequence from Alberto Becattini (May 14, 2007).