The library of congress records the following notes: An extended and bitter indictment of Jefferson Davis and the Southern slave system. The work consists of a series of twelve vignettes with accompanying verse, following the scheme of the nursery rhyme "The House That Jack Built." The same nursery rhyme was adapted for some of the bank war satires during the Jacksonian era. The vignettes are as follows: 1. the "House," showing the door to a slave pen; 2. bales of cotton, "By rebels call'd king;" 3. slaves at work picking cotton, "field-chattels that made cotton king;" 4. slave families despondently awaiting auction; 5. slave auctioneer, "the thing by some call'd a man;" 6. slave shackles; 7. slave merchants; 8. a slave breeder negotiating in an interior with a slave merchant; on the wall appear portraits of Jefferson Davis and Gen. P.G.T. Beauregard; 9. a cat-o-nine-tails; 10. a slave driver flogging a bound female slave; 11. Jefferson Davis, "the arch-rebel Jeff whose infamous course / Has bro't rest to the plow, and made active the hearse." 12. symbols of slavery, an auctioneer's gavel, whip, auctionnotices, and shackles lying torn and broken with a notice of Jeff Davis's execution because " . . . Jeffs infamous house is doom'd to come down." -- Library of Congress http://www.loc.gov/pictures/resource/cph.3a15301/

The House That Jeff Built (Table of Contents) 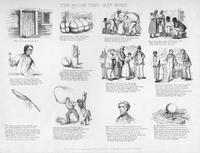