This issue is a variant of Longshot (Marvel, 1985 series) #4 [Direct]. There exist further variants: 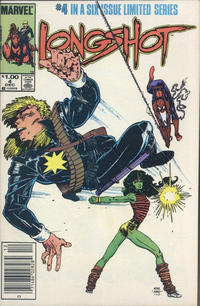 Genre
superhero
Characters
Longshot; She-Hulk; Spider-Man [Peter Parker]; Ricochet Rita; Butch; Darla; Alfie; Magog (villain); Mojo (villain); Spiral (villain); Major Domo (introduction, villain)
Synopsis
Thanks to blacking out New York City and stealing diamonds, Longshot's picture is plastered all over the news. He befriends Butch, Darla and their gang of friends and gives them some of the diamonds. Running across She-Hulk and then Spider-Man, Longshot is attacked by both heroes. Longshot's powers allow him to escape and he reunites with the kids who are going on a monster hunt with a gun. Longshot touches the gun and it sparks more memories of his former life. Longshot and the gang track down the monster who turns out to be Magog. Mojo and Spiral teleport to Earth and arrive in Rita's home.
Reprints
Keywords
diamonds