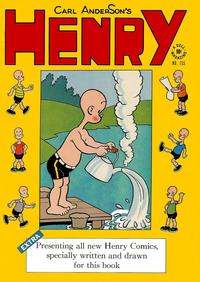 [Bottleneck on Diving Board] (Table of Contents: 1)

Genre
humor; children
Characters
Henry
Synopsis
A timid diver causes a delay on the diving board.

Genre
humor; children
Characters
Henry; Henry's mother; Henry's uncle; Waldo; Lefty; Zero; Dusty (dog)
Synopsis
Henry pretends he has a toothache in order to get his uncle to the dentist to have two teeth filled. Henry goes to the movies and watches a cartoon--a Henry cartoon!--which he doesn't like and demands his money back. Later he starts a dog laundry, but ends up taking more baths than the dog.

Henry breaks the "Fourth Wall" and talks directly to the reader at times, as does the narrator in the panel captions.

Genre
humor; children
Characters
Henry; Henrietta; Henry's mother; Atomic Bomb (bully);Horace; Weasel; Tommy; Mister Blubber; Blimp
Synopsis
A tough new kid, Atomic Bomb, is in town. Henry accidentally challenges him to a fight. While in training Henry gets knocked out and dreams he is a flying hero, complete with a magic cape. After the fight, which Henry wins with the aid of a falling tree, he tries to raise money to buy a toy panda to give to Henrietta.

Henry breaks the "Fourth Wall" at times and talks directly to the reader.

Inside back cover; black, red, and white; pantomime story.