Charlie McCarthy and the Twenty Thieves (Table of Contents) 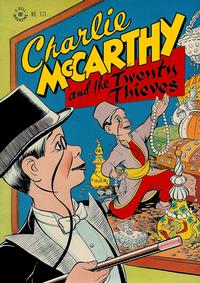 Inside front cover and inside back cover; black, red, and white. Illustrations and hand-lettered text. Pencils and inks credits for this sequence from Alberto Becattini (May 14, 2007).

Charlie McCarthy and the Twenty Thieves (Table of Contents: 2)

Genre
adventure
Characters
Charlie McCarthy; Mortimer Snerd
Synopsis
In an ancient city, Charlie is a poor woodchopper and Mortimer is a wealthy merchant. While cutting wood one day, Charlie sees a gang of bandits coming. He hides in a tree while the leader of the gang (The Twenty Thieves) gives the command "Open Sesame". A stone pivots, revealing the gang's hideout, which is full of stolen treasure. After the gang leaves, Charlie tries the magic words and takes some gold on his mule Scheherazade. Mortimer learns of Charlie's gold and goes to the cave himself. He is trapped inside when he can't remember the magic words to open the door. The Twenty Thieves return, find Mortimer, and chain him to the wall to starve. Charlie returns to the cave for more gold, finds Mortimer instead and takes him home. After the thieves find Mortimer gone, they eventually track him down to Charlie's house. The leader of the gang, disguised as an oil merchant, takes a caravan with the rest of the thieves hidden in oil jars on backs of ten mules. Charlie allows the caravan to spend the night in his back yard, but becomes suspicious and traps the thieves with some cement.
Keywords
celebrity

Basic plot is from "Ali Baba and the Forty Thieves." Narration in opening panels is much like that of a radio program. Pencils and inks credits for this sequence from Alberto Becattini (May 14, 2007)