Cover has "This is a King Features Comic" emblem on it. 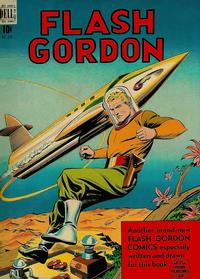 Inside front cover; black, red, and white. A model of the Jet-Car, to be cut out and folded into a toy.

"Adventure on Orano" (Table of Contents: 2)

Genre
science fiction
Characters
Flash Gordon; Dale Arden; Dr. Zarkov; Torro (villain): Zora
Synopsis
Two modified V-2 missiles take off from Earth, one crash-lands on Mongo, the other on the planet Orano. Flash finds the ship that crashed on Mongo has an American crew. The other ship is a mystery. Flash and the Americans go to Orano to investigate, but are captured by the forces of Orano's cruel ruler, Torro, the Terrible.
Reprints

Inside back cover; black, red, and white. Model of Orano space-ship to be cut out and folded into a toy.

Genre
science fiction
Synopsis
Soldiers fire against an unseen enemy with a spaceship in its launching cradle as a background.
Reprints

Back cover. Art appears to have been designed for the back half of a wrap-around cover, but does not match the front cover.