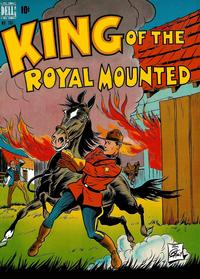 The Mounties Don't Just Get Their Man! (Table of Contents: 1)

Inside front cover; black and white; text and illustrations.

[The Suspicious Death of Sir Basil] (Table of Contents: 2)

The Mounties at Work (Table of Contents: 3)

Inside back cover; black and white; text and illustrations

Back cover. Five illustrations of Sergeant King, one taken from panel of the interior story.