Cover is comprised of panels from newspaper strips. None of the illustrations is from the interior story. The cover has the "This a King Features Comic" bullet on it. 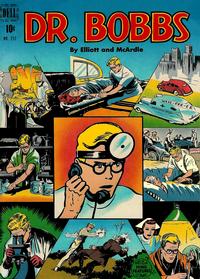 Genre
drama; western-frontier
Characters
Dr. Stephen Bobbs; Carrie B. Wigglesworth; Adam Worthington Brokes (aka Cactus Jack); Martha Allgood; Cissie Allgood; Judge Flunk; Mayor Cruss
Synopsis
Fabulously wealthy Adam Brokes hires Dr. Bobbs as his personal physician. Brokes takes Dr. Bobbs to Jacktown, a former ghost town that Brokes, under the name "Cactus Jack," had been spending money on for 20 years. Brokes and Bobbs disguise themselves as hobos to see how Brokes' money has been used. They find that Jacktown has been taken over by corrupt politicians who use Brokes' money to enrich themselves and hold an iron grip on the town.
Reprints