Cover has "by Chester Gould" on it, but it is uncertain if he did the art. 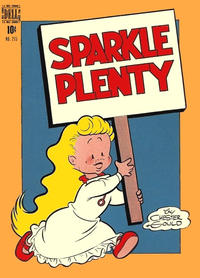 Genre
detective-mystery
Characters
Dick Tracy; B. O. Plenty; Gravel Gertie; Sparkle Plenty (introduction); Sam Ketchum; Tess Tracy; Junior Tracy; Diet Smith; Mrs. Volts (villain); Brier
Synopsis
After the birth of Sparkle Plenty to Gravel Gertie, B.O. Plenty's family gets $3,000 for letting "Glance" magazine do a feature on Sparkle. B.O. buries the money under a post, it gets lost, then is found by Dick Tracy. The story skips ahead six months to Mrs. Volts and her chauffeur dumping stolen electrical supplies on B.O.'s land. They are caught by B.O. but are let go when they pay him $20. After hiding in the North Woods, Mrs. Volts returns to the Plenty's house looking for her dog, which has become Sparkle's pet. She threatens to kill either B.O. or the dog, but is run off by a shotgun blast by Gravel Gertie. Mrs. Volts returns later and sets the Plentys' house on fire when her truck hits it. She hides out at her nephew Brier's house but is accidentally suffocated by gas when Brier and his wife are taken in by the police for questioning. Brier buries the body in a golf course bunker, where it is eventually found by Sparkle's dog when B.O. and Diet Smith are golfing. The capture of Brier and his wife is told in one panel of text and the issue ends with Sparkle's one-year birthday party in her family's rebuilt house.
Reprints