Zane Grey's Heritage of the Desert (Table of Contents) 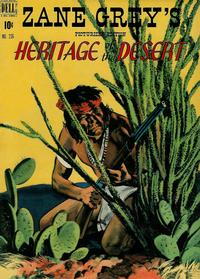 Genre
western-frontier
Synopsis
Poem about being a buckaroo.

The Heritage of the Desert (Table of Contents: 2)

Genre
western-frontier
Characters
Jack Hare; August Naab; Snap Naab; Mescal; Holderness; Eschtah
Synopsis
August Naab finds Jack Hare on the trail, sick and near death. He takes him in and his family nurses him back to health. Hare finds himself in the middle of a water war with Naab's neighbor Holderness and also in the middle of a love triangle with Naab's son Snap and the Indian maiden Mescal.

Adapted from the 1910 novel "Heritage of the Desert" by Zane Grey.

Inside back cover; black and white. Poem and illustrations. Copyright 1947 by S. Omar Barker.