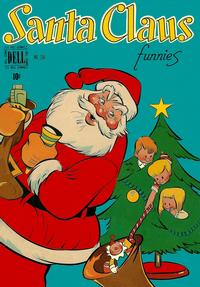 Christmas in the Heart (Table of Contents: 1)

Inside front cover; black and white. Text and illustrations. Pencils and inks credits for this sequence from Alberto Becattini (May 14, 2007).

A Visit from Saint Nicholas (Table of Contents: 3)

Illustrated version of the 1823 poem by Clement Clarke Moore, sometimes titled "The Night Before Christmas." Pencils and inks credits for this sequence from Alberto Becattini (May 14, 2007).

The Land Without Christmas (Table of Contents: 4)

Genre
fantasy-supernatural
Characters
Santa Claus; Brainy; Dasher; Dancer; King Pepy
Synopsis
Santa uses a rocket to take a test trip to a distant star and a land ruled by the bad-humored King Pepy. The inhabitants knew of Santa but the land had been too far away for Santa to visit previously. When Santa doesn't have any presents for them, they become angry and Santa is forced to hitch a ride home on a shooting star.

Script, pencils, and inks credits for this sequence from Alberto Becattini (May 14, 2007).

Synopsis
A game to advance on a trip to see Santa.

Characters
Santa Claus; Timothy Tucker; Sparkie (elf); Flash (elf); Dash (elf)
Synopsis
Selfish Timothy Tucker redeems himself in Santa's eyes by giving away his prized (but broken) rocking horse to firemen who are repairing toys to give as Christmas gifts.

A drawing of a reindeer to cut-out and fold into a standing figure.

Long, Long Ago (Table of Contents: 9)

Christmas Carol [As Joseph Was A-Walking] (Table of Contents: 10)

Characters
Joseph; Mary; the Christ child
Synopsis
The story of Christ's birth in a stable.

Back cover; text and illustrations. An abridged version of the traditional English Christmas carol "As Joseph Was A-Waukin' " as printed in The Home Book of Verse, Volume 1 (New York, Henry Holt and Company, 1912.) One stanza is omitted and the spelling is slightly modified.