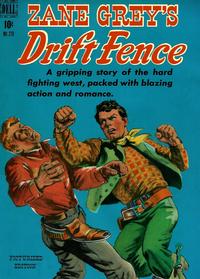 The Chuck Wagon (Table of Contents: 1)

Genre
non-fiction; western-frontier
Synopsis
Facts about the chuck wagons used to feed cowboys on the range.

Inside front cover; black and white. Text and illustrations.

Genre
western-frontier
Characters
Big Jim Traft; Jim Traft (his nephew); Molly Dunn; Slinger Dunn; Hack Jocelyn
Synopsis
At his uncle's request, Jim Traft comes to the Diamond Outfit, where he is to be in charge of building one hundred miles of fence to keep the ranch's cattle from straying. He has to win the respect of his men while fending off those who don't want the free range fenced.

Gollub Illustrated the main story and used many of his wrestling moves in the fight scene panels. It is also his habit on interior panels to show the direction of the movement with curved lines. I concur that both front cover and back cover are his work as well. Rick Richmond.

Genre
western-frontier
Characters
Molly Dunn
Synopsis
A girl cringes against a saddle on a fence, with the shadow outline of the two cowboys fighting (image from the front cover) in the background.

Back cover. Promo for the story. Same artist as front cover.