The Mysterious Rider (Table of Contents) 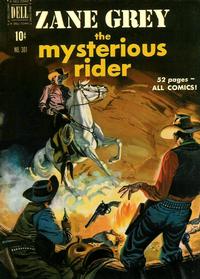 The Cowboy's Life (Table of Contents: 1)

Inside front cover and inside back cover; black and white. Illustrations and lyrics to the western song "The Cowboy's Life" in large type. Lyrics are from "Cowboy Songs and Other Frontier Ballads" collected by John A. Lomax, The MacMillan Company, New York, 1929.

The Mysterious Rider (Table of Contents: 2)

Genre
western-frontier
Characters
Bent Wade; Bill Bellhounds; Jack Bellhounds; Columbine Bellhounds; Wilson Moore
Synopsis
Bent Wade mistakenly kills an innocent man who was accompanying his wife and newborn daughter. His wife takes their daughter back east, but the wagon train they are traveling with is massacred by Indians. Bent Wade spends the next 20 years searching for his daughter, whose body was missing from the remains of the wagon train. He is seemingly cursed, as innocent men die by various means whenever he is around. His travels take him to Bill Bellhound's Whiteslides Ranch, where unknown to him, his daughter was taken 20 years ago when she was found in a grove of Columbine trees. Columbine is pledged to marry the cruel Jack Bellhounds, but loves ranch hand Wilson Moore. Jack frames Moore for a robbery and Wade must find a way to clear him.

[The Pecos Queen] (Table of Contents: 3)

Back cover. Painting with block of typeset lyrics to the western song "The Pecos Queen." Lyrics are from "Cowboy Songs and Other Frontier Ballads" collected by John A. Lomax, The MacMillan Company, New York, 1929.