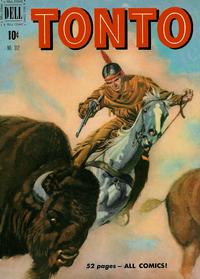 Inside front cover; black and white. Three illustrations with text.

Genre
western-frontier
Characters
Tonto; Stone Bear; Scout (horse); Laughing Dog
Synopsis
Tonto returns to his home village to find that hunters have been killed or wounded by rifles that blow up when fired. Despite interference from Laughing Dog, a warrior who wants the rifles to challenge the Army, Tonto finds the traders who are dealing the inferior rifles and convinces Laughing Dog that the traders are crooks.

Tonto and the Stock Killers (Table of Contents: 3)

Genre
western-frontier
Characters
Tonto; Scout (horse)
Synopsis
Tonto helps a rancher by setting traps for a pack of wolves that is preying on his cattle. They capture something similar but unexpected.

Was first credited to Jon Small with a question mark, but this is not Small. Compare the first story by Jon Small.
It looks like Alberto Giolitti.

The American Cayuse (Table of Contents: 4)

The Shaman (Table of Contents: 5)

Genre
western-frontier
Characters
Tonto; Tall Pines; Swift Otter; Scout (horse)
Synopsis
Tonto and his friends Tall Pines and Swift Otter help a white man retrieve his gold after he is robbed by three other white men. Tonto pretends to be a shaman to force a confession from the guilty party.

How to Build a Wigwam (Table of Contents: 6)

Inside back cover; black and white. Illustrations and text.

The Batista (Table of Contents: 7)

Genre
non-fiction
Synopsis
Description of the construction of a batista, a giant war club used by the Arikara and Huron tribes to crush enemy's canoes.

Back cover. Illustrations and text.