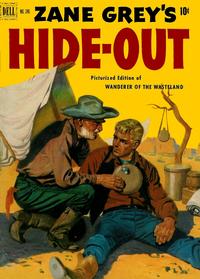 Saguaro-Giant of the Desert (Table of Contents: 1)

Inside front cover; black and white. Text with two illustrations. Pencils credit for this sequence from Alberto Becattini (May 14, 2007). Originally credited "Bob Jenney ?". It is Jenney, his face and his inking is with clear brushlines, as in many western fillers, and the early Cisco Kid comics. Confirming art ID by Steinar Ådland January 2011.

Genre
western-frontier
Characters
Adam Larey [Wansfell]
Synopsis
Adam Larey, thinking he has killed his brother, flees to the desert, where he spends the next 12 years helping people as the wanderer Wansfell.

The artwork is by the same as in Tappan's Burro FC # 346, and in most of the Chuckwagon Charley's Tales in Roy Rogers. Art ID by Steinar Ådland January 2011.

The Cowboy's Lament (Table of Contents: 3)