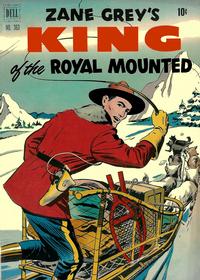 Make Your Own Moccasins (Table of Contents: 1)

Genre
non-fiction
Synopsis
Directions on making a pair of moccasins.

Inside front cover; black and white. Illustrations with typeset text.

First Line of Dialogue or Text
Groggy from his bad fall and near drowning...
Genre
adventure
Characters
King of Royal Mounted; Inspector McKenzie; R. I. Peace (villain)
Synopsis
Groggy from a near-drowning, King neglects to search the bodies of two killers before taking them to the morgue. The morgue attendant, R. I. Peace, finds money belts full of cash on the bodies, and takes the money and runs. Sick with fever, King follows Peace, who takes advantage of King's weakened condition to take King's Mountie uniform and frame him in the killing of three miners for their gold.
Reprints

Newspaper strips are formated to four tiers per page. Story continues on inside back cover in black and white and concludes on the back cover in color.