Zane Grey's Riders of the Purple Sage (Table of Contents) 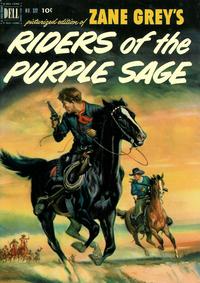 Fast on the Draw (Table of Contents: 1)

Genre
non-fiction; western-frontier
Synopsis
Facts about "quick-draw holsters" and a description of the action of "fanning the Colt."

Inside front cover; black and white. Two illustrations with hand-lettered text. A sign in the background says "B. Spaulding," which may be a clue to the artist.

Zane Grey's Riders of the Purple Sage (Table of Contents: 2)

Genre
western-frontier
Characters
Lassiter; Jane Withersteen; Bern Venters; Bess; Nathan Tull (villain); Oldring (villain)
Synopsis
Widow Jane Withersteen is being harassed by an unwanted suitor. She is protected when the gunfighter Lassiter shows up. Bern Venters, one of Withersteen's men, tracks a rustled herd into a canyon and shoots a masked rider, who turns out to be a young woman. Beset by guilt for shooting a woman, Venters takes the wounded woman, Bess, to a remote valley to recuperate. Eventually Venters returns to the ranch, only to find that Withersteen's enemies are planning an attack. Withersteen, Venters, and Lassiter escape, but the gang follows them.

Adapted from the 1912 novel "Riders of the Purple Sage" by Zane Grey. The adaptation is fairly faithful to the original, but all references to Mormons and religious conflict have been removed.

Inside back cover; black and white. One illustration with typeset lyrics. The lyrics match a 1913 version of the song, though some stanzas have been omitted, either because of language ("whiskey," "hell") or for space.

Back cover. One large illustration illustrating an event described in five stanzas of "The Old Chisholm Trail," which are reprinted from the inside back cover.