Photo is retouched to enhance color and a background has been added. 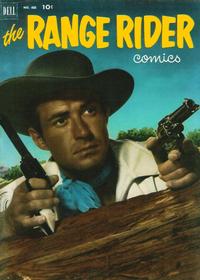 The Stagecoach (Table of Contents: 1)

Genre
non-fiction; western-frontier
Synopsis
Facts about the Overland Stage Line, which ran from St. Louis to San Francisco from the 1850s to the 1870s.

Inside front cover; black and white. Two illustrations plus hand-lettered text. Letters credit for this sequence from Alberto Becattini (May 14, 2007)

Range Rider and the Monster of the Desert (Table of Contents: 2)

Genre
western-frontier
Characters
Range Rider; Dick West; Sage (dog); Rawhide (horse)
Synopsis
Dick West's uncle Jed Perdue leaves him tied to a tree in the mountains to die of exposure. With Dick's death, Perdue would inherit a valuable ranch. Range Rider rescues him, then goes for help a few miles away where he meets Professor Hornbone. The professor is assembling dinosaur skeletons he is scavenging from tar pits on Dick's ranch. Range Rider and Dick have a showdown with Perdue and two henchmen in the building housing the assembled skeletons.

Originally credited to Sparky Moore by Alberto Becattini (May 14, 2007), but thanks to error report # 7376, this artist is identified as Schoenke. He drew Laredo Crockett, and samples from that series confirms it without doubt. Compare the identical horses and faces. He also had some stories in Annie Oakley & Tagg #4 and 8, and several in Gene Autry #69, 75, 76, 81. And some in Range Rider #2 and 4.

Range Rider and the Killer of Rio Hondo (Table of Contents: 3)