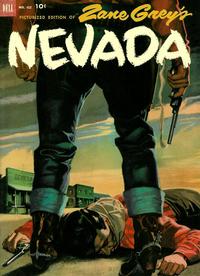 Inside front cover; black and white. Illustrations and text.

Genre
western-frontier
Synopsis
Jim Lacy, a former gunfighter who later went by the name of Nevada, tries to start his life over in Arizona as a ranch hand named Texas Jack. Eventually he has to resume the Jim Lacy, gunfighter, identity when he goes undercover to break up a ring of cattle rustlers.