Cover is an edited photo with a hand-drawn background illustration. 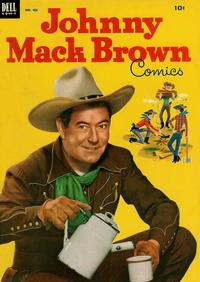 Genre
western-frontier
Characters
Johnny Mack Brown; Rebel (horse)
Synopsis
Johnny happens upon an accident when a horse falls down a hill and the rider's leg is broken. He takes the man to his nearby ranch, where he finds that this is one of a number of "accidents" that have befallen the rancher and his men recently.

Faces with rather big ears and horses often moving as if flying are points to notice on Sparky Moore art, and later the many closeup faces in sideview. He had most of the stories in Dell's Rin Tin Tin, and also several on Mack Brown and other westerns. He is credited on Johnny Mack Brown by Jerry Bails' Who's Who.

The Border Trail (Table of Contents: 3)

Genre
western-frontier
Synopsis
A taciturn prospector refuses to give directions to a pair of men on the run after a murder, leaving them to pick their own way at a fork in the trail. One way leads to the border, the other to a deathtrap in quicksand.

Johnny Mack Brown and the Glass Scavenger (Table of Contents: 4)

Genre
western-frontier
Characters
Johnny Mack Brown; Mule Beardsley
Synopsis
A hotel guest hides a map to his dead brother's gold mine in a bottle and lowers it to a pile of bottles below the window of his room. The next morning two crooks rough him up looking for the map before Johnny interrupts them. After telling Johnny his story, the man finds that the pile of bottles has been taken by a junk man who's building a bottle house in the desert five miles out of town. The house builder turns out to be Mule Beardsley, an old friend of Johnny's.

Most probably this is the work of Marsh, and the faces on page 3 have some of his characteristic protuding lips. The horses are clearly his, as the face of the old man with strawhat. He is credited on Mack Brown by Jerry bails's Who's Who, and had most of the early ones.

Murder in the Dark (Table of Contents: 5)

Genre
western-frontier
Characters
Sheriff Walt Morrison
Synopsis
A stranger rides into Red Rock just before midnight to report a murder. The next morning the stranger rides with the sheriff back to the murder site, but the stranger's story arouses suspicion.

The Prospector's Burro (Table of Contents: 6)

Inside back cover; black and white. Two illustrations and hand-lettered text.