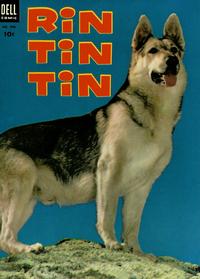 Inside front cover and inside back cover; black and white. Total of eight illustrations with hand-lettered text.

Genre
animal
Characters
Rin Tin Tin; Capt. Red Johnson; J. B. Mooney
Synopsis
Rin Tin Tin and his owner Capt. Red Johnson meet J. B. Mooney at an airport. Mooney has secret plans for a government rocket. He, Johnson, and Rinty are escorted from the airport by men who are supposed to be government agents, but they slug Johnson and Rinty and kidnap Mooney. After going to the rocket plant, Johnson and Rinty trail the spies to a hidden valley that holds ancient cliff dwellings, as well as Mooney and the spies.

Pencils and inks credits for this sequence from Alberto Becattini (May 14, 2007). This story is set in the present and has no connection to the more well-known Rin Tin Tin TV series, which did not air until October 1954.

Back cover; color. Photo is cropped to remove background.