Indicia title is "BOB CLAMPETT'S BEANY AND CECIL, No. 477". Code number is BEANY O.S. #477-536. Copyright 1953 by Bob Clampett. Fourth of seven Beany and Cecil Four Colors. Pencils credit for this sequence from Alberto Becattini (May 14, 2007). Based on the original Beany and Cecil TV series "Time For Beany." 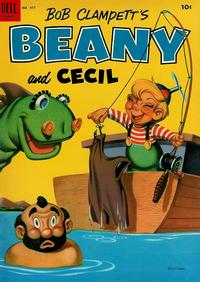 Inside front cover; black and white. Pencils and inks credits for this sequence from Alberto Becattini (May 14, 2007).

[In Search of Caboose Goose Egg] (Table of Contents: 2)

Script, pencils, and inks credits for this sequence from Alberto Becattini (May 14, 2007). Story is untitled but according to Don R. Christensen's files was submitted as "Caboose Goose Egg". "Inka Dinka Doo" was the theme song of entertainer Jimmy Durante.

Inside back cover; black and white; pantomime story.

Genre
fantasy-supernatural
Characters
Beany; Cecil
Synopsis
Cecil has a lemonade stand where you get your second glass free.