Queen of the West Dale Evans (Table of Contents) 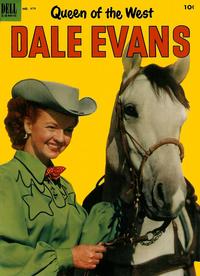 [Dale and three of her children] (Table of Contents: 1)

Inside front cover; black and white. Photo with typeset caption.

Dale Evans and "The Gent from Laredo" (Table of Contents: 2)

Genre
western-frontier
Characters
Dale Evans; Pat Brady; Bullet (dog); Buttermilk (horse)
Synopsis
On a rainy night, Dale's café is held up by robbers who get away with $16. The robbers remain in town, staying with a former cellmate, and find there is going to be a charity dance the next week. One of the attractions at the dance is to be Mrs. William Van Dusen, who owns the most valuable collection of diamonds in the world. The two hatch a plot to steal the diamonds, but Dale is also at the dance and disrupts the plan.

Roy Rogers is mentioned in dialogue, but does not appear.

Genre
western-frontier
Characters
Dale Evans; Lulu Hanks; Bullet (dog); Buttermilk (horse)
Synopsis
Neighbor Lulu Hanks foils an attempt to rob Damon's Jewelry Store, but the robbers get away. Lulu and Dale recognize the fabric the robbers used for their masks, but don't know know where they saw it. While collecting door-to-door for a "white elephant" charity sale, Dale stumbles upon the clue that identifies the robbers.

Story continues on inside back cover in black and white and concludes on back cover in color. Roy Rogers is mentioned briefly in dialogue, but does not appear.