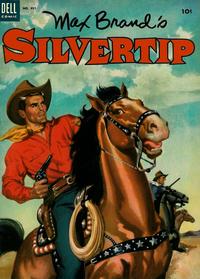 Genre
western-frontier
Synopsis
Map of the area where the story takes place, with teaser for the story.

Genre
western-frontier
Characters
Silvertip; Bandini
Synopsis
Silvertip meets up with Bandini, an old enemy, and another man is killed when Bandini tries to ambush Silvertip. Silvertip takes the dead man's horse back to his father to tell him of his son's death and finds himself in the middle of a deadly feud between the Mexican Casa Monterey and the gringo Drummon Ranch.

Story continues on inside back cover in black and white and concludes on back cover in color. Adapted from the 1933 novel "Silvertip" by Max Brand. Pencils and inks credits for this sequence from Alberto Becattini (May 14, 2007).