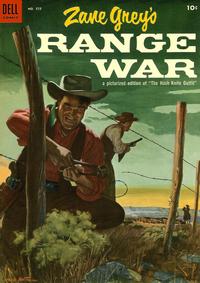 Genre
non-fiction; western-frontier
Synopsis
Explanation of the causes of range wars between cattlemen and sheep herders.

Inside front cover; black and white. Text with two illustrations. Pencils and inks credits for this sequence from Alberto Becattini (May 14, 2007)

Adapts Zane Grey's novel, "The The Hash Knife Outfit," which first appeared as the serial novel "The Yellow Jacket Feud" in Collier's, beginning September 21, 1929. It is the sequel to Zane Grey's novel "The Drift Fence." See Four Color #270 (March 1950).

Albert Micale pencils and inks credits for this sequence from Alberto Becattini (May 14, 2007)