Indicia title is "RHUBARB, THE MILLIONAIRE CAT, No. 563." Code number is RHUBARB O.S. #563-546. Copyright 1954 by Doubleday and Company, Inc. Based on the character "Rhubarb" created by H. Allen Smith. Third of three "Rhubarb" Four Colors. 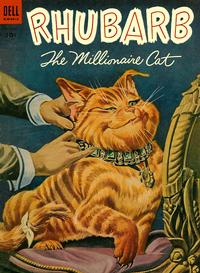 Rhubarb Wins by a Whisker (Table of Contents: 2)

Genre
animal; sports
Characters
Rhubarb (cat); Eric Yaeger; Polly Yaeger; Len Sickles
Synopsis
Rhubarb the cat is the owner of the Brooklyn professional baseball team. He and his guardians, Eric and Polly Yaeger, are in Florida for spring training. A conceited ball player, jealous of Rhubarb's celebrity status, feeds info to opposing managers so the Brooklyn team will lose its Grapefruit League games.

Genre
animal
Characters
Rhubarb (cat); Eric Yaeger; Polly Yaeger
Synopsis
Eric and Polly take Rhubarb to the circus, where the cat becomes part of the show. That night the cat returns to the circus and is taken captive by an unscrupulous animal trainer, who gets a hypnotist to make Rhubarb think he's a dog.