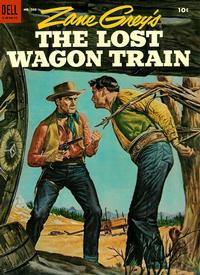 Inside front cover; black and white. Illustrations and typeset text.

Genre
western-frontier
Characters
Latch; Cynthia; Lester Cornwall; Leighton; Estle; Corny Cornwall
Synopsis
The twists and turns of the life of Latch, a renegade Southerner, who teams with Indians to order the destruction of a wagon train and then must endure a series of events that takes loved ones from him.

Adapts Zane Grey's novel, "The Lost Wagon Train," which first appeared as a serial novel in Cosmopolitan, beginning May, 1932.