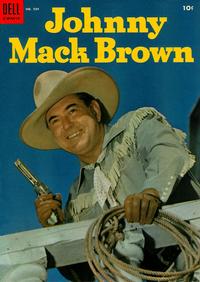 Inside front cover; black and white. Two illustrations with typeset text.
Lenox had many fillers in western titles for Dell, and he can be spotted by his inking and horses with a marked line along the side of the nostrils. Also their broad, rounded chest.

The Killer's Trail (Table of Contents: 2)

Genre
western-frontier
Characters
Johnny Mack Brown; Rebel (horse)
Synopsis
Arriving in Grande Mesa late at night, Johnny pays a visit to an old friend, Jim Murdock, who is managing a theatre. Two robbers break in to steal the payroll, shoot Jim, and knock Johnny unconscious. When Johnny recovers consciousness in the doctor's office, he finds that Jim is dead. The next morning, Johnny and Tom Murdock, Tom's son and town sheriff, ride out to pick up the trail of the killers.

Art identification by Hames Ware and Mike Barrier (March 2011).
Originally credited to "Sparky Moore ?" and "John Ushler ?". The first panel points to both pencils and ink by Ushler because of the very high hatbrim with flat underside in level with the eyebrows. This is a sure sign of Ushler's pencil layout, and also the horse with rounded neck, almost like a chess piece Knight. Faces and action are Ushler too. He had many western stories for Dell on Roy Rogers and Rex Allen. There is nothing of Sparky Moore in the pencilwork.

The Avenging Avalanche (Table of Contents: 3)

Genre
western-frontier
Characters
Johnny Mack Brown; Rebel (horse)
Synopsis
Johnny interrupts a stage coach robbery, but the guard is shot. Spike Nash, the driver, and Johnny take the wounded man to a nearby Navajo village, where Spike is well-known. The bandits sneak up on the village and kill a Navajo. Johnny trails the bandits to a box canyon.

Story continues on inside back cover in black and white and concludes on back cover in color. Navajo sand-painting ceremonies and burial customs are presented in a respectful manner. Art identification by Hames Ware and Mike Barrier (March 2011).