Cover is a photo of Hansel and Gretel, cropped from a still from the movie, with a painted background. 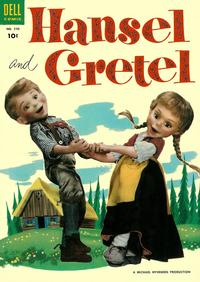 Hansel and Gretel (Table of Contents: 1)

Inside front cover; black and white. Five stills from the movie with text underneath.

Genre
fantasy-supernatural
Characters
Hansel; Gretel; Rosina Rubylips, the witch; the Sandman; Dew Fairy
Synopsis
Hansel and Gretel are sent into the forest by their mother to gather berries for dinner. After losing their way, they spend the night in the forest, guarded by 14 night angels. The next day they find the gingerbread house of Rosina the witch. She captures Hansel to fatten him up and make him part of the gingerbread hedge. Gretel rescues Hansel and the pair use a log to knock the witch into her stove, which then explodes. The house and the witch disappear and the children who were part of the hedge turn back into their original forms.

Story continues on inside back cover in black and white and concludes on back cover in color. Adaptation of the 1954 stop-action puppet movie "Hansel and Gretel." Pencils, inks, and letters credits for this sequence from Alberto Becattini (May 14, 2007)