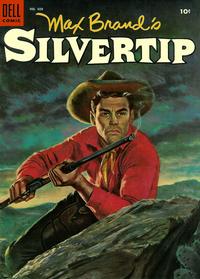 The Valley of Vanishing Men (Table of Contents: 1)

Genre
western-frontier
Characters
Silvertip
Synopsis
Map of the locations in the story.

Inside front cover; black and white. Pencils and inks credits for this sequence from Alberto Becattini (May 14, 2007)

Silvertip and the Valley of Vanishing Men (Table of Contents: 2)

Genre
western-frontier
Characters
Silvertip; Parade (horse); Frosty (wolf)
Synopsis
Silvertip helps Ben Trainor find his brother Clyde, who has been kidnapped by Doc Yates' gang, which aims to get Clyde to reveal the location of a gold claim.

Story continues on the inside back cover in black and white and concludes on the back cover in color. Based on the 1934 novel "The Valley of Vanishing Men," by Max Brand. Pencils and inks credits for this sequence from Alberto Becattini (May 14, 2007)