Zane Grey's To the Last Man (Table of Contents) 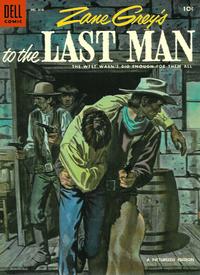 Inside front cover; black and white. Pencils and inks credits for this sequence from Alberto Becattini (May 14, 2007)

Zane Grey's To the Last Man (Table of Contents: 2)

Genre
western-frontier
Characters
John Isbell; Lee Jorth
Synopsis
John Isbell returns from Oregon to his father's ranch near Grass Valley to help protect him from Lee Jorth, a sheepman who has a long-standing grudge against Isbell's family.
Reprints

Adapts Zane Grey's novel, "To the Last Man," which first appeared as a serial novel in Country Gentleman, beginning May 28, 1921.