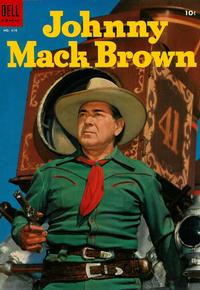 Genre
biography; western-frontier
Characters
Capt. Harry Wheeler
Synopsis
A summary of the life of Capt. Harry Wheeler, a soldier in the Spanish-American War and World War I, an Army scout at Fort Sill, and a member of the Arizona Rangers from 1902-1917.

Inside front cover; black and white. One large and one small illustration with hand-lettered text.

Gold of the Arivaipas (Table of Contents: 2)

Genre
western-frontier
Characters
Johnny Mack Brown; Rebel (horse)
Synopsis
Two bandits trail an old prospector who has a map woven into an Indian blanket that is a guide to buried Indian treasure. The prospector's granddaughter comes for a surprise visit and Johnny takes her on the trail to find the old man.

Genre
western-frontier
Characters
Johnny Mack Brown; Rebel (horse)
Synopsis
Cattlemen try to stop sheepherder Rufus Blythe from spending his required one day a month on his homestead in Piñon Valley, so his claim there will be forfeited.
Reprints

Originally credited to Jesse Marsh with a "?" on inking, but it is the work of Tony Sgroi. He had most of the Range Rider stories, and many in Spin & Marty. He is best to spot by his very accurate and elegant horses and the rather "angry" faces with marked cheekbones, narrow or angry eyes and often scowling mouth and a little skewed jawline. Also his use of emotion lines round the head can be noticed.

Thanks to an Outlaw (Table of Contents: 4)

Text story with one 1/3 page illustration.

Genre
western-frontier
Synopsis
Outlaw Ace Jenner meets his match when he tries to take a horse from a young girl, who's an ace with a slingshot, and her brother, who swings a mean frying pan.

A one-shot story, not part of a series.
Originally credited to Jesse Marsh, but it is the work of Tony Sgroi, and Notes are the same as for the previous story.

Genre
biography; western-frontier
Characters
Old Bill Williams
Synopsis
Summary of the life of Old Bill Williams, a circuit-riding preacher in Missouri who quit the ministry to live among the Osage Indians. Later he became a beaver trapper in the Rocky Mountains and the high plateau country of northern Arizona.

Inside back cover; black and white. One large and one small illustration with hand-lettered text.

[Johnny with small bag and drawn gun] (Table of Contents: 7)

Genre
western-frontier
Characters
Johnny Mack Brown (photo)
Synopsis
A photo of Johnny standing in front of a store window, holding a small bag in his left hand and a drawn six-gun in his right.