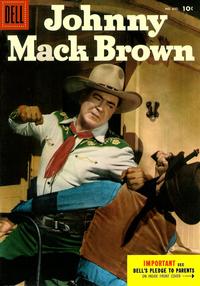 Genre
western-frontier
Characters
Johnny Mack Brown; Rebel (horse)
Synopsis
Johnny is mistaken for Jack Tabb, a gunman and bank robber, and is taken to the town of Starbuck, where a gangleader is determined to turn it into an wide-open "outlaw town."

The Phantom Surprise (Table of Contents: 3)

Genre
western-frontier
Characters
Johnny Mack Brown; Rebel (horse)
Synopsis
After being shot at in an ambush, Johnny pretends to be dead when a stagecoach stops and takes him to the next town. At his "funeral," Johnny, in disguise, recognizes one of the mourners as Switch Connors, an ex-con. Using the name Tom Malone, he has gotten a job at the bank in order to steal a shipment of $500,000 when it arrives at the bank from the mint.

Story continues on inside back cover in black and white and concludes on back cover in color. Pencils, inks, and letters credits for this sequence from Alberto Becattini (May 14, 2007). Inscription on a grave marker on page six of the story reads "RIP Jesse M He drawed too slow"